Difference Between String And StringBuilder In C#

String is Immutable and StringBuilder is Mutable

This is a one word answer. In this article I would like to dig things in more details

Both String and Stringbuilder represent sequence of characters. When we list out their differences some of us don’t remember basic difference. That is String Class is in the System Namespace While StringBuilder is in System.Text.

Immutability of string object Means, If any of your operation on the string instance changes it’s value, it will end up in the creation of new instance in a different address location with modified value. Mutability of StringBuilder is just opposite for this.It won’t create new instance when their content changes as string does.Instead it makes the new changes in the same instance.

Mutability and Immutability of these two can be understood from following C# Program. 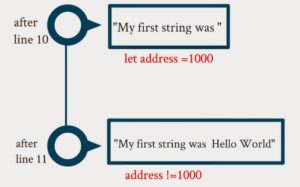 in line 11 content of str changes, so new instance is created in a different memory location with new value as shown in above image.

Even Though line 14 changes the value of stringbuilder variable sbr it won’t create a new instead it will keep appending new strings to existing instance.see how it looks in terms of memory

Because of this behavior of StringBuilder it also known as Mutable String.

I am not convinced

If you say I’m not convinced. let us check these behaviours using  C# code snippet. For that I am using C# class ObjectIDGenerator(in System.Runtime.Serialization Namespace). Actually it will return an unique integer value for instances that we created in our programs.With the help of this class we can check whether new instance is created or not for various operations on string and stringbuilder .Consider following program

Did you see that..?, Instance id for string get changed from 1 to 2 when str concatenated with “Hello World”.while instance id of sbr remains same as 3 after append operation also. This tells all about mutability and immutability. blStatus variable indicate whether the instance is new or not. Now you are convinced right?

Let’s discuss performance difference between string and stringbuilder.The following code box will explain things in a better way. Before that if you don’t know how to measure execution time in C# you can read my article from here .

Output of this program was

This output clearly shows their performance difference.StringBuilder is about 70X faster than String in my laptop. it might be different in your case but generally speaking stringbuilder gives 10x times speed than string.

One more thing,If you do an operation on a string variable, Creation of new instance occurs only when it’s current value changes.try following code,

initial and final id is 1-means new instance is not created for these operation since it does not change the value of str. You may wonder about how compiler shows this much intelligence.

»Should I Use StringBuilder Everywhere? Ans

»Why .NET String is immutable? Ans