How to Use jQuery Ajax in Asp.Net Core MVC for CRUD Operations with Modal Popup

How to Use jQuery Ajax in Asp.Net Core MVC for CRUD Operations with Modal Popup
ShareTweetLinkedinSubscribeWhatsapp
PinterestRedditTumblrPocketDiggMailVkWeiboXing

Here we’ll discuss how to use jQuery Ajax CRUD Operations in ASP.NET Core MVC with Bootstrap Modal. To demonstrate this, we implement operations insert, update, delete and retrieve with online bank transaction details. With jQuery Ajax we can make request to controller action methods without reloading, these types of user interface is usually implemented in most of the enterprise applications out there. 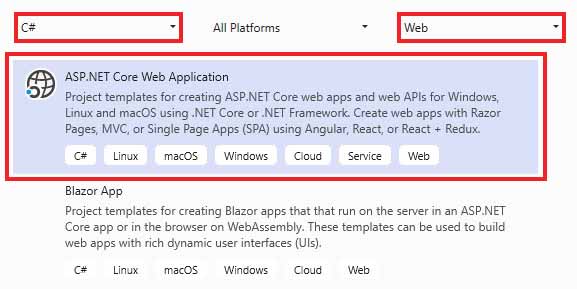 Once you provide the project name and location. Select Web Application(Model-View-Controller) and uncheck HTTPS Configuration. Above steps will create a brand new ASP.NET Core MVC project. 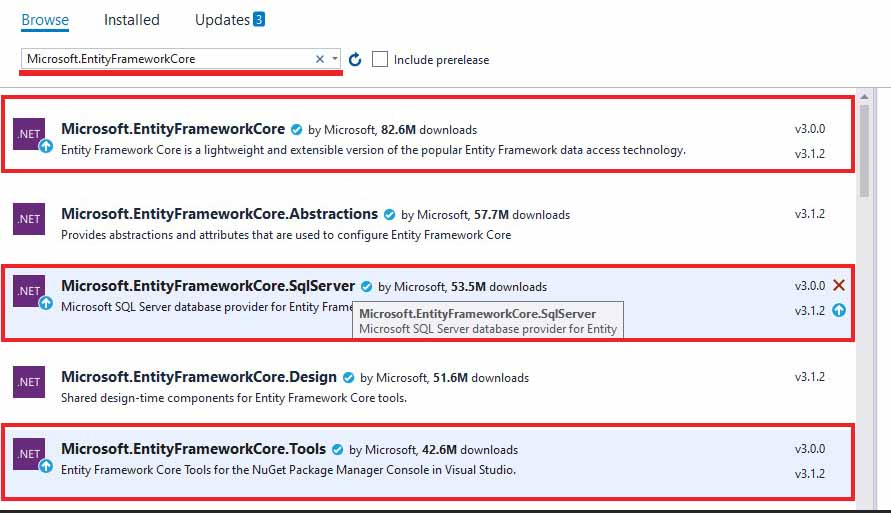 Now let’s execute migration command one by one.

After the successful migration, you could check the physical DB whether it is created as per the model or not.

Now let’s add an MVC Controller, with Action Methods for CRUD Operations – Insert, Update, Delete and Retrieve. For that right-click on Controllers folder, Add > Controller. and then select MVC Controller with views, using Entity Framework. Fill up the window with corresponding details. 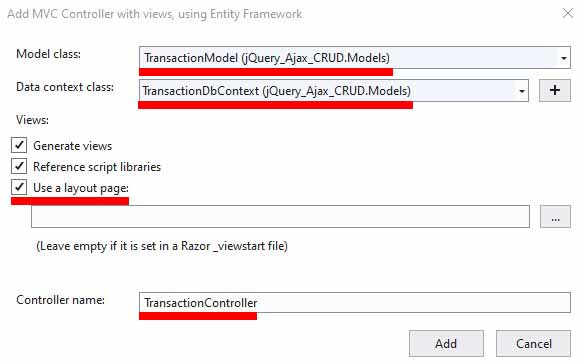 If you face the following error while creating the controller. you should try again after installing the NuGet Package – Microsoft.VisualStudio.Web.CodeGeneration.Utils. 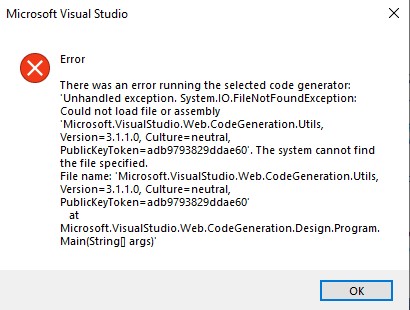 Inside the controller, you could see action method for the crud operations for both GET and POST request.

First of all, I want to add references for Google Font – Roboto and Font Awesome Icon in the main layout – _Layout.cshtml.

Now let me update the global stylesheet (wwwroot/css/site.css) with all required css rule for the entire application.

You could access the newly created controller with this route – /Transaction/[action_name]. You can configure this controller as default route in Startup.cs.

Inside the controller index action, we retrieve all of the records from the table. now let’s update the index view from which we’ve to do all other operations with the help jQuery Ajax.

Inside this index view, we’ve done some major changes. First of all added the validation scripts in Scripts section. By default in index.html, we had a table for listing transaction records. we’ve to move that into a new partial view _ViewAll. We’ve to re-render the table after each operation like insert, update and delete. So it’s better to move the table into a separate partial view for jQuery Ajax Get request later. Create the file _ViewAll.cshtml in /Views/Transaction folder as shown below.

Inside this partial view, we have a button for insert operation in table header. Each record has buttons for update and delete. All of these button’s click event is bound to their javascript functions. we can discuss that later. Now you could see the empty table, if you navigate the index action – /Transaction/Index.

In transaction controller, you could see Add or Edit action method with their views. In this project, we will combine these two action methods and their views to one called – AddOrEdit. for AddOrEdit view, you just need to make few changes in existing view Edit.cshtml. First of all, rename the file to AddOrEdit.cshtml and update the file as shown below.

There are some re-arrangement for input controls, other than that, mainly we’ve changed the form post action method to AddOrEdit, and asp-route-id is set to PK property – TransactionId. Because this form should be submitted to post action method – AddOrEdit with the parameter id for TransactionId. In this view, you could see an additional hidden property – Date. Because it’s value is passed from code ( not from user interface ) with the date at which transaction is made.

From GET action method, it returns the view AddOrEdit, that we’ve just created. Inside POST action method, we’ve done the Insert/ Update operation based on the id. The request into this POST action method will be made using jQuery Ajax. so the action method must return a JSON Object. To refresh the list of records (transactions), _ViewAll action method is passed in html property. In order to convert a view into HTML string, we’ve defined a function inside a new C# file – Helper.cs as shown below.

To open a request-response in showInPopup method, we’ve used bootstrap modal, so let’s add its Html elements in _Layout.cshtml as shown below, just before the footer.

Inside showInPopup method, we will make the GET request to the given url, and request-response is saved inside modal-body div. we open the model with the function modal function. we’ve called this function for adding new transactions in table header button and also in edit/ update button for a given record row, to open the form by populating the record details in input controls.

In jQueryAjaxPost, we make the Ajax Post request to the form action URL. If validation is failed the same form with validation error messages will be replaced in current modal popup, If validation is succeeded, then html string for the table is replaced in place of current table div. finally to prevent from the default form submission, we have returned false from the function. we’ve called this function for insert and update operation. The modal popup with the form looks like this. 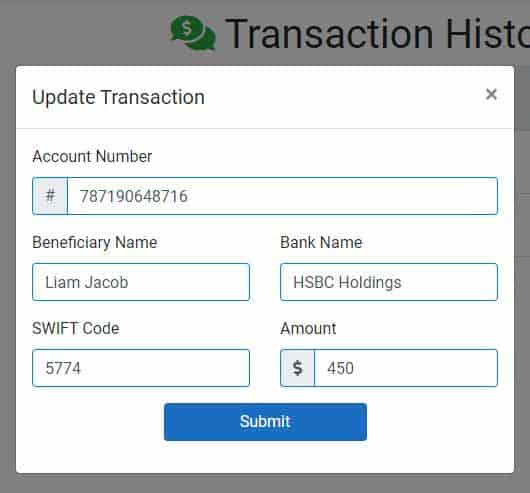 Delete a Record with jQuery Ajax

Now let’s delete a record with the help of jQuery Ajax, we’ve already added the delete button for each table row. Actually it is a form submit button. Its always recommended to implement delete operation with a post request. Here we called DeleteConfirmed action method (URL – Transaction/Delete). Now we’ve to update the corresponding delete post action method as shown below.

After the delete operation, Html from _ViewAll is replaced in place of the table. we’ve completed with implementing jQuery Ajax CRUD operations in ASP.NET Core MVC. As of now our application looks like this.

Now let’s look how to add loading spinner, while waiting for request-response from the server. For that you can add following div in main layout _Layout.cshtml, just above the footer.

In this application, we accessed the AddOrEdit GET request only through jQuery Ajax. you can also access the GET action method – AddOrEdit with URL – /Transaction/AddOrEdit. But it would be a plan Html and not plesant. If there is any such action methods only defined for jQuery Ajax Request we’ve to block the direct access to them. For that, we can create a NoDirectAccess attribute in Helper.cs file.

Now you just need to add this attribute to GET action method – AddOrEdit as shown below.

In our YouTube channel, we have discussed the same topic in following video.