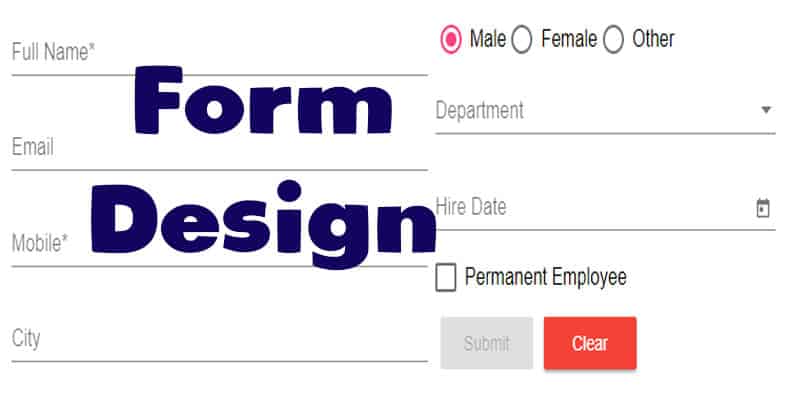 With this article we have started the series – Build a Complete Angular Material App. From Scratch, In this part we will design a form in Angular Material containing frequently used CRUD components – input text box, dropdown, check box, radio button etc.

What is Angular Material ?

Angular Material is a package/ tool for angular developers, It contains a set of high-quality UI components based on Google Material Design Concept.

Here we will demonstrate the use of Angular Material Components with practical examples rather than like the official documentation. You can see the component-wise Angular Material documentation here : https://material.angular.io.
In upcoming articles we’ll cover angular material datatable – sorting, paging and filtering. pop up, notification, etc.

1 – Initiation and Installation of Angular Material

First we have to add theme stylesheet into styles.css.

In this application, we’ll deal with details of an employee – Full Name, Mobile, Email, City, Gender, Department, Join Date and Type of Job.

We’ll design the form using Reactive Forms approach, so first we have to define form group for angular material form in employee.service.ts as follows.

We have initialized the form group property with properties related to employee. Inside FormControl constructors we have passed default values for each control. $key will be used as primary key for each employee record.

Now we have to inject the service class in app.module.ts as follows.

Along with that we have imported animation module – BrowserAnimationsModule, which is a must for angular material component default animations.

Inside the form html, we have shown the dropdown from a static array, It is defined in EmployeeComponent class as follows.

In-order to implement the validation, we have to update the form group in service class.

In-order to show validation error indication, we have to update corresponding control html as follows.

Wire up click event to clear button as follows.

reset function will clear all controls, but we have to the primary key($key) value as before. Because we’ll be using this same employee form for insert and update operation. we want to keep the $key value during update operation so that’s why we have this extra work for $key.

initializeFormGroup function reset the controls to their default values . It is defined in service class as follows.

Now update the styles.css as follows.

In the next part we’ll implement firebase CRUD operations with this form, before that we will convert the static department dropdown to dynamic using firebase collection.

GitHub link is given in both article and in YouTube video.

I’m making an app by following your tutorial but got struck at form edit option. I’m not able to populate form value in edit mode in popup.

Hello! I’ve been watching the whole series about the Angular 7 material and CRUD operations in firebase that you made. I got stuck at 35:54 of the “Angular Material Data Table – Paging, Sorting and Filter Operation” video. The error that I get is ” core.js:1673 ERROR TypeError: Cannot read… Read more »

Hi, I have a question. My website is ASP .Net core with Angular 5 when it loads a page loading is very huge. How Can I loading with Event Scrolling?﻿

Your work is great. The YouTube videos are very helpful. Would you mind adding in routing and some cool query examples using Angular 7 & firebase?